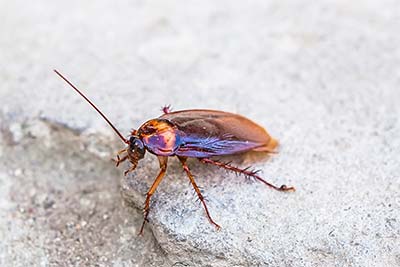 Which roach is living with you?

You can expect to find German cockroach infestations more frequently in restaurants, lodging facilities (such as hotels and motels), and other institutional facilities where food is present. Brown in color and approximately ½” long, adult German roaches have two dark brown stripes behind their heads. German cockroaches reproduce more quickly than most other species, and as such prolific breeders, they are particularity troublesome to control.

What is an Oriental Cockroach?

Shiny and black, these cockroaches are often referred to as “water bugs” because they hang out in damp areas. They have smooth, dark bodies. Oriental cockroaches enter homes by going under doors and through gaps and pipes, traveling in sewers and drains into a building.

All the cockroach species are considered particularly disgusting bugs because they are carriers of bacteria, viruses, and other yucky stuff. They don’t attack humans, of course, but they spread disease-causing microorganisms. Sensitive people may experience allergy-like symptoms of sneezing, itching, and wheezing when they are present.

When you spot a roach, Dr. Death doesn’t care what you call it. We make them a thing of the past. Call now!

We respect your privacy and do not tolerate spam.